Tweets yesterday from Michael Edwards and Joseph Kilroy reminded me of a map I produced last year in which I showed commuting patterns in South East England, minus London. I did this to get a sense of the polycentric nature of travel to work in the South East as this has been a topic of many previous studies - including the famous Hall and Pain book - but none (to my knowledge) using the 2011 Census data I mapped. The other reason for me blogging about this today is that I'm speaking on a similar topic at Modelling World 2015 this Thursday in London. Enough words, time for some maps, which I've refreshed for this week.

The first map below shows all commuting in the South East of England in 2011, without place names. As you can see, I've removed London from the equation, both in relation to travel to work flows and from the underlying map canvas. This gives a slightly different perspective than the one we're used to. The second map is the same as the first but I've added the names of local authorities in order to help identify places. Click any of the images to enlarge.


Now, here's what it looks like when you add London back in... Kind of brings to mind astronomical metaphors, as hinted at in a previous study by the RTPI. I should add that the definition of a supernova is 'a star that suddenly increases greatly in brightness because of a catastrophic explosion that ejects most of its mass' so this might be stretching things slightly... Then again, if what people are saying about the displacement of the poor from London this might actually be spot on.

Finally, I've produced a zoomed-in version closer to London where you can see some of the flows which go through/over the capital. I don't fancy that commute! 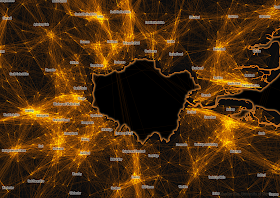